The robot that can move soft inanimate objects

A research team at Yale has developed a robot that can wrap itself around soft objects and make them move. This system was developed by Rebecca Kramer-Bottiglio, an engineering professor at the university, in her lab. This robotic system is a general purpose machines which is designed to move everything which is sufficiently soft. 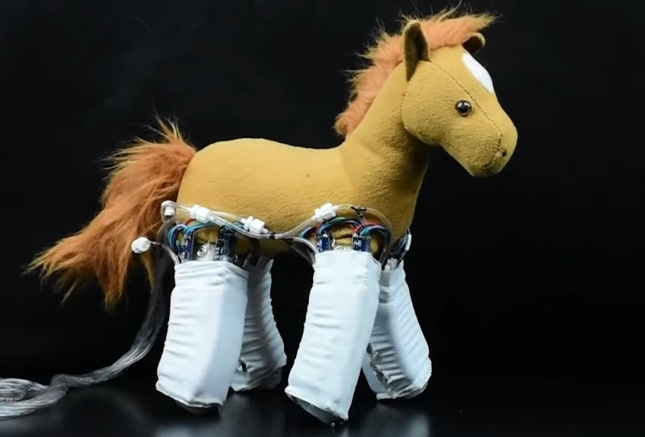 Kramer-Bottiglio, lead of the project, said in a statement that We can take the skins and wrap them around one object to perform a task — locomotion, for example — and then take them off and put them on a different object to perform a different task, such as grasping and moving an object. We can then take those same skins off that object and put them on a shirt to make an active wearable device.” The researchers, in a published in a paper published in Journal Science Robotics wrote that this Omni skin can help move a wide range of soft bodies.

This project basically took the idea from the functions a human skin performs. It protects what is underneath, for instance, protecting the body from bacteria, viruses etc. But the basic idea was the skin being the organ which dictates the movement of our body. So the researchers at Yale, instead of tissue based skin, used a Robotic skin to to move inanimate objects. This robotic skin is made of elastic sheets which has sensors and actuators(movers) that are embedded in it and they are the reason why this robotic skin can then make an inanimate soft object move.

This innovation is pretty exciting because a single robot can do stuff that would actually require multiple robots. This technology also involves using multiple skin for complex movements such as bending and compressing at the same time. The demonstration of this was done on a foam cylinder which was then able to crawl on the ground, a shirt which could improve bad posture by gripping it. It also caused a stuffed horse to wiggle its legs.

Although the system is not fast as other robots but it can perform various functions. The researchers say that even though the project seems funny it actually is not. It is intended to fulfill a serious purpose for NASA which required multi-functional, squishy robots that could adapt to unpredictable tasks in deep space.

We are yet to see the change what this amazing new invention can bring to the world.