The first original Apple computer, also known as Apple-1 from 1976 was sold at an auction for $375,000 on Tuesday, 25th September 2018 in Boston. It was purchased by an Anonymous buyer. Apple-1 from 1976 is one of the few model that are still functional after so many years. Apple-1 as last sold in April 2017 to Hutmacher’s heirs 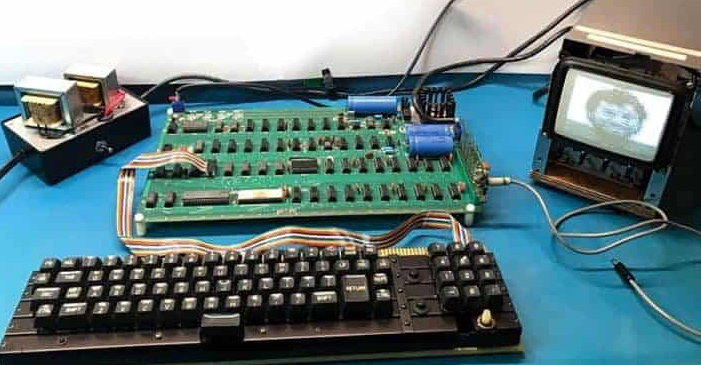 This is the rarest computer made by Apple as only 200 units of this computer was made. Another specialty of this computer is that it was handmade by its manufacturers. All 200 units were hand-built by Steve Jobs, founder of Apple, and Steve Wozniak. To date around 63 units still exist of the 200 that were made by Steve Wozniak, around 6 of them are reported to be in functional condition.

Apple-1 was designed over a period of years by its creators and was only released in printed circuit board form on the insistence of Steve Jobs that they sell it.  The Apple I was based on the MOStek 6502 chip and it was launched in 1976 at Homebrew computer Club located in Palo Alto, California. At that time the price at which it was marketed was only $666.66 and now fetching $375000 after 40 years or so, shows how rare of a piece Apple-1 is. Interestingly, Steve Jobs and Wozniak sold their personal belongings to finance the production. Jobs sold his car while Wozniak sold his HP calculator. The first unit of Apple-1 was used in a high school math class.

In October 1977, Apple-1 was discontinued by Apple Company as it was already been successfully replaced by a much better performing computer, Apple-2. Apple-2 sold 5 million units world and was a massive hit considering it was a breakthrough, a revolution in the tech world. Although Apple-1 had nothing on Apple-2, it showed the world what a useful affordable computer could be like. It also paved the way for Apple’s success story. Apple now stands among one of the most valuable company in the world. It’s value has now crossed $1 trillion.